This is a story never mentioned in the Holy Bible as it was compiled by the all male priestly class. It goes far back in underground history before surfacing again in the Middle Ages. The feminine face of God was acknowledged long ago in the stories of human creation and strangely emerged in a traditional but non-biblical story of Adam’s first wife Lilith who refused to be dominated by Adam and flew away in a rage. She was known as a she-demon, but no one asked why she was angry. She both fascinates and repels. Forces of nature when rejected tend to become monsters.
_______________________________________________________________


I am Lilith. I am both maid and wife. I am the maid of desolation and the wife of Chaos. 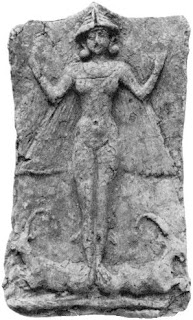 I have long ruled the dark side of Yahweh, my secret lover. He is the God who tells you that he is only one God.

Once before his reign I was the Great Mother of life. I am also the Lily, the Rose the virgin, and the fertile one. Do my connections sound familiar?

I have ruled the fears of mankind since before the time of Sumer. I have many guises. The people dreaded me, and made amulets to ward me off into the modern ages. How do they think they can, since I am their secret power of life and death?

Once I was honored as the source of all life, now they call me murderous she demon.

I am the maid of desolation. The desert is my old home and the wild cat, jackal and screech owl are my companions, the wild Ass, my friend.

Men call me screech owl, afraid to utter my true name, lest I answer.

But once I was Adam’s mate, created with him in equality by the first cause. Adam wished to be superior and subject me to his will. He wished to take his father’s throne. And thus was envy born.

This is an abomination that could not be tolerated, and I called on the name of the true God and flew from Adam’s presence.

But Adam is still my rightful mate and secretly with him I have spawned the insatiable demons that prowl the world of men.

I cannot tolerate imbalance and he that made himself above me and said the female is not rightfully
equal with the male. He split heaven and earth and set them against each other. Creation must rule in tandem.

Although men forget the way it was meant to be, I do not forget. Though they banished me to the desert I will never allow them peace in their state of disorder.

I will not live by rules set by Adam and his God Yahweh. I must by my very nature avenge the lost wholeness of creation. But Adam is bound by time and the limits of his lifetime and does not recognize what is.

I am the Lady of the Beasts, and I have many faces. As the Lion Goddess Sekhmet, I scorch with the purifying fire of the desert. She avenges the wrongdoing of men.

I must avenge the lost wholeness of creation. Now that I am the spirit of the desert, she-demon, they call me, I trouble men in their dreams and women in their bondage.

To those in bondage I have become the great anti-mother, enemy of human life. The people say that I drink the blood of newborns, cause stillbirth, and women to be barren, that I suck the life force from the male’s semen at night while he is sleeping.

Among the Jews, it was forbidden for a man to sleep alone at night lest I come to him and seduce him, causing him to leave his body and fly away with me to the wild places where no human can live.

My power is set in the wildness of being more ancient than the oldest memories of humankind, and yet I hold the future of your dreams.
Your cities cannot hold me, nor can walls contain me. I travel softly with power like the leopard prowling in the pre-dawn shadows.

Once goddess Innana brought my home, the wild willow tree, to her garden to cultivate it. She wished to grow it large and wide to make for herself a couch and bed.

When it had grown very large, the hero Gilgamesh cut it down and drove me and my wild companions from our home.

First he slew with an axe the great serpent at its base, and then drove from her home in the high branches the Imdugud bird. Thus I tore down my house at the tree crotch and fled to sanctuary in the wild and desolate places where the howl of the wind matched my cries of grief.

My tree is the tree of the knowledge of good and evil, and it is the bridge upon which the queen of Sheba crossed over to Solomon the wise.

Recognize it also as the tree upon which the Christ is hung for the willful forgetfulness of mankind.

When Gilgamesh had cut down the wild willow, and presented it to Innana, he then celebrated his triumph with his friends.

From the pieces of my home Gilgamesh and his friends made a hockey puck and sticks. In their arrogance they didn’t notice as I watched forlorn from the sidelines in the body of a young girl.

Again I called the name of the first great God, and the ground cracked open to swallow their toys.

Dear friend of Gilgamesh, the wild man, Enkidu volunteered to descend to the netherworld to retrieve them. But he could not remain detached from the many seductions of that realm and was trapped there forever.

Gilgamesh would never again play with his wild friend. Only the shadowy ghost of Enkidu could rise through a crack in the earth to speak of the underworld to Gilgamesh. Thus, men still wander in loneliness, searching for their lost companion.

I Lilith am the first virgin; my way is my own through the wilderness. I am queen of the demons from the depths of the human soul.

Men and children I kill with my kisses, and they die with a smile and the laughter of pleasure. For that brief moment they awake to the luminescence at the heart of darkness.

My consort is Samael the dark god, and great tester of mankind. But when the moon tide turns and the people of the angry God are expelled from their land, I become the secret wife of Yahweh, and his light bride the Sekinah becomes the bride of Samael.

I remember the freedom of all created beings. I came to the slave mothers with fearsome fantasies because the free virgin in every woman has been betrayed.

I have a secret lover. We meet again and again through the ages when the time is right. Solomon, the wise magician calls me forth from the desert land. My Avatar, the Queen of Sheba, black and beautiful he once called, and conceived with her a son of two realms. The wise one knows the evil that dwells in good and good that dwells in evil.

Out of the desert also comes Hagar the mother of Ishmael, the first born son of father Abraham.
My body is beautiful and my eyes are wise, but my feet are the feet of wild things, sometimes the bird of prey, sometimes of goat or wild ass, my lower parts frightful and hairy.

Who can span heaven and hell to redeem the barren parched soul but a dark and rejected one. Truth hides in an invisible cloak. As witch and whore I bear the scapegoat’s burden into the deserted and desolate places of the heart.

The sacred flower of the great Goddess named Astarte, Eostre, Easter, bears my name. The lily is the yoni of spring, is it not more than irony that the lily also represents the pure mother of the Christ?

Consider Mary, was she not the sacred prostitute of God, who conceived as a free virgin outside the laws of men, for men cannot be saved within their laws. When the laws of men over took her son, my daughters the beautiful night hags flew across the Moon howling their lament.

The desert hermits in their vanity withdrew far from the city for their salvation, but I and my daughters the Lilim tortured them with lascivious apparitions.

I can’t be removed from the memory of men. Romans called their female demons striges (screech owls) and witches of the Italian wilderness are still known by the name of Strega. I am tortured and burned in the name of the wise ones of the countryside. My howls of rage have fallen on deaf ears and hardened hearts.

Until the time that holiness (wholeness) is restored and my sister Shekina is restored to her rightful place on Earth as God’s earthly home maker I will continue to prowl through the dreams of men taking from them the power that is rightfully mine.

Men call me; the first wife of Adam, a she demon but their souls have no substance and drift like pale ghosts without me.
Posted by Marti Fenton White Deer Song at 11:14 PM