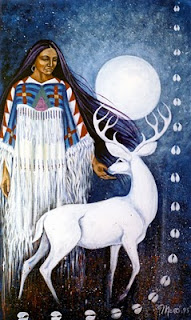 This is my first post. I've been considering a blog for several weeks. While I've been journaling since I was 18 I have never made any writing public.

First I'll talk about the name I'm using for this blog: White Deer Song. For the past 18 years I have lived in Taos, New Mexico, and when I began painting again after a gap of 20 plus years, I often painted white deer. I had no idea at the time why I did this, but it was a strong compulsion. In fact my paintings seemed as if they were not coming from the same person who had painted before. The themes, colors and style were completely new and also a surprise. It was almost as if someone else had taken over my imagination and my hands. I have a deep interest in Native American cultures and all indigenous cultures and realized that white animals in species that are normally not white is the sign of a special spiritual quality conveyed by this animal. The reasons for the visit by these white deer is gradually unfolding.

When I was three years old, my family lived in Vallejo California. I remember two of our neighbors coming back from a hunting trip with two Whitetail Bucks. Along with several other local children I approached with curiosity about these two animals laying on the ground. As I approached the hair stood up on the back of my neck and a huge emotion coursed through my body. It was too large and intense for my small child's body to contain and I had to draw back. But I was so fascinated with the sight of these animals and their strange power that I kept trying to approach. Finally I ran away. The feeling was so intense that I felt that I would explode if I didn't get away. I was aware even at that time that the emotion that drove me away was not fear but something much deeper.

My family moved back to Denver, Colorado when I was three and a half. For several years, I was not able to enter a building where deer or elk heads were mounted. Although I was an obedient child in most ways, I had an absolute prohibition against entering such a place and no one could make me do so. I would have resisted with every power I had. My parents who were normally intolerant of my childhood whims and reactions respected this taboo until I eventually grew out of it.


Looking back, I suspect that I didn't so much grow out of the taboo as learn to repress it in order to avoid the social problems that went with it. In those days, Denver was still a cow town and there were lots of hunters who displayed trophies on their walls. A number of them were family members.

If I had been raised in an indigenous culture I'm sure that my people would have recognized that I had some spiritual connection with deer medicine. But we were desensitized to all such signs as much as possible. Although I never fit into the culture (if this is what it was) I was born into there is no doubt that it seriously interfered with all of my natural sensitivities, relationships and powers. I am still working on recovering what was lost and probably will for the rest of my stay in this incarnation.

I will be adding to this subject in the future.
Posted by Marti Fenton White Deer Song at 5:40 PM