FRACTAL GEOMETRY AND THE UNSEEN WORLD 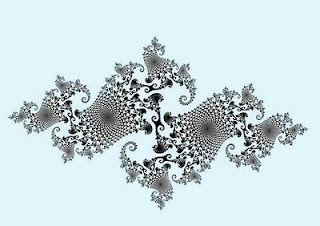 Recently there was a program on the PBS station about Benoit Mandelbrot and the discovery of Fractal Geometry.  It seems that everything we know is a branch of a branch, etc., of a core shape. It is based on the concept of self-similarity multiplied until it fills space.  This concept really seized my attention recently even though it’s certainly not the first time this idea was presented to me.  All the way to Santa Fe the other day, I saw endless fractals in trees, rocks, and clouds.  On the way home it snowed and I thought of the shapes of snowflakes.  But something kept nagging at me.  I knew a new insight was coming in although I couldn’t pin it down.  Then just as we were nearing Espanola, the light bulb came on.

What if the concept applies to the unseen world just as it applies to the physical dimension that we can perceive with our senses.  What if there is only one world and the dimensions that we are able to perceive are divided from the unperceived world only by the fact that we don’t have the equipment to perceive beyond the five senses.  Wouldn’t this be an easy way to explain synchronicity, psychic perception and even astrology? Our physical senses are, after all, very limited.  We see the results of Fractal Geometry in the physical world visible to the eye but it seems that the underlying principle would exist in the space we can’t see or hear as well.  This might explain the realm of spiritual and intuitive perceptions and psychic phenomena, as well as magic. Of course the limit of the physical senses is to some degree a cultural bias. We all know that young children that are still not seriously indoctrinated with what they can and can’t perceive often have a connection to realities not recognized by Scientific Materialism. This thought is just a beginning.  I’ll be thinking about this for awhile.

Many things are related across time as well as space.  There are even patterns in history that seem to reoccur over and over with slight variations.  Is it possible that this too is an aspect of fractal patterning?

When I was a child I loved Kaleidoscopes.  I remember spending hours playing with these fractal mandalas. They were like snowflakes, there were no two alike.  Later as a teenager I would be able to close my eyes and see intricate geometric patterns, and no, I wasn’t taking anything.  It was just something that happened and I assumed it worked this way for everybody until it quit happening for me.  Psychedelic art back in the 70’s also used fractal patterns quite a bit.
Posted by Marti Fenton White Deer Song at 1:18 AM