MABLE DODGE LUHAN & TONY LUJAN -1992 and How I Came to Taos, New Mexico

It was the Quin-centennial year, 500 years since Christopher Columbus was interrupted on his quest for Asia by a hitherto unknown island. The discovery by a European of this island off the coast of what is now South America began an incredible chain of events. I don't for one moment believe that this was actually the first time a European set foot on this "New World," nor do I believe that the inhabitants of this "New World" had never before encountered people from another continent before this event. However, sometimes timing is everything. Five hundred years before 1992 was exactly the right time for this awakening to blast the world. No one could argue that at this time these two worlds saw something they had never truly seen before; each other.

It was at this time that I became conscious of the Native world around me. It suddenly popped out of the shadows into full view. I read everything I could read about the state of indigenous people all over the world and about the knowledge that our species owes to them. To top it off I had a vision in which indigenous people began to share their kinship with Mother Earth, the other beings we share this earth with and that dazed part of ourselves that still remembers who we are.

The most powerful and haunting memory of my childhood was the discovery of the Southwest as a child of twelve. The adobe and stone ruins of the Anasazi, the at that time mud and wood hogans of the Navajos, the expanse of red dust, junipers and sage totally captured my soul. But then I tried to forget this out of reach world and adapt to the world I had to deal with. All this remained dormant until the Quin-centennial.

In 1992 I had been visiting New Mexico for several years and began to focus on Taos. That autumn I decided to sell the Denver house and move. The real estate agent told us that spring was the most active season so I thought if we put the house on the market in October perhaps it would sell by spring. It occurred to me that if Creator wanted us there sooner we would be moving in soon.

We had an immediate response when two buyers made bids at the same time. In the competition we ended up getting more than our asking price and had to move within 30 days. We arrived in Taos, in a Blizzard and were immediately introduced to the trickster side of our new home. Taos welcomed us but not before putting us through some unsettling tests. I will tell that tale another time.

Just before the move I had discovered Mable Dodge Luhan in the sale shelf of the bookstore where I worked. Her sense of mission was a total shock because it was very close to a vision that I had been secreting. And then I learned that my new Taos Pueblo friends were intimately connected to Mable and Tony. It took time for the full impact of this to arrive. My new friends Joe J. and Frances Suazo knew Tony and Mable intimately. 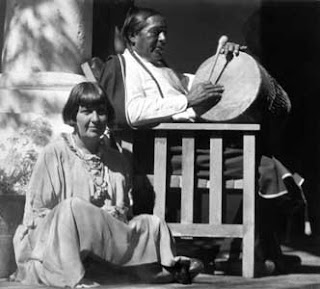 Joe's mother had been adopted by Tony who had no natural children. Joe grew up between the Pueblo and Mable's "Big House."

Last winter while living in Arizona with my partner Blue Spruce Standing Deer, the son of Joe J. and Frances Suazo I saw an article in the online version of our Taos News indicating that filmmaker Mark Gordon was making a documentary AWAKENING IN TAOS about Mabel and that he intended to concentrate on her role as a Visionary bringing the "movers and shakers," of the western world to experience Taos and the Pueblo as a model of spiritual integration with the natural world. Previous biographers and film makers generally portrayed the gossipy aspect of Mabel as a spoiled New York heiress from a decadent circle of artists and writers who brought her famous friends to Taos. This story has been hidden in plain sight for a long time. I regard it as a piece of synchronistic magic that Mr. Gordon picked up this story as a continuation of the important meeting of two world views. It is a story to be continued for the long haul. Someday we will look back and wonder how we could have missed the message from those who hold our future in their past. It brings to mind a quote from iconoclastic psychologist Fritz Perls, "in a conflict between topdog and underdog, underdog always wins." Of course he was referring to unconscious conflicts within an individual but I see this dynamic applying to the social unconscious as well. Indigenous people in their underdog situation hold the lost side of being human in this world.
Posted by Marti Fenton White Deer Song at 7:00 PM