HE THINKS, SHE THINKS: Do Opposites Workout? 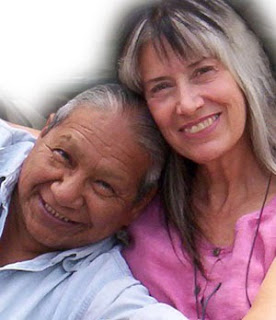 I had an argument, i,e, discussion with my honey this morning about our very different styles of dealing with the habitual complaints of a friend about the relationship she's in.  He feels he has to do something about it and get it resolved because she brings it up in conversation a lot, but I feel that it's not my place to fix it.  In fact this is a typical example of our different ways of coping with the things that go on around us.  He is impatient with drivers over each deviation from correct driving standards and I seldom think about other drivers except to respond automatically to their behavior out of self defense.  I don't expect to cure them.  I do notice if something really off the chart happens as it often does here in Taos, but I don't expect to fix them.  He wanted to be a policeman when he was younger and I wouldn't want to have to pay such close attention to every detail about other drivers. I would find it exhausting.  I'm an introvert and he is an extrovert.  Not surprising, huh?


He wants our relationship to be almost perfect by his standards and gets restless if a high level of relating isn't maintained while I like to slide now and then because I have other parts of  life that pull my attention from time to time.

My devotion isn't pulled away its just that in my psychic house there are other rooms to attend to now and then, but I never forget about him and stay pretty focused on his needs.  He on the other hand expects me to be very sensitive to his state of mind and heart and he watches mine like a cat watches its environment, sensitive to every move. I rather automatically adjust to his moods and movements and he watches to see if I do.

Sometimes I see him as a spoiled prince and he sees me as a wimp that doesn't ask for what she wants and allows people to shit on her. He thinks the world out there is probably up to no good  and its important to be cautious and think defensively.  I think if you expect something bad to happen it probably will. On the whole I've been pretty effective in putting up a protective screen.  Now and then I fail but life goes on. He sees a failure in security as a loss of points in the game of life.  I don't like games.

The reality is that he is often very insightful about what is going on with other people and gets right to the point. He would make a good therapist.  But sometimes he gives therapy when it isn't wanted.  He feels a personal responsibility to do something about everything out of balance that crosses his path.  I too make a pretty good therapist because I see behind the outward actions to the underlying motives.  I can get pretty straight on too, but tend not to do so when I detect that the person in question is not interested in doing anything about it.

The reality is that he is very good in an emergency, very clear headed and is often down right generous and courageous.  Strangely enough so am I.  I must admit that he is quicker to stop on the road if he detects the possibility that someone is in trouble and do whatever he can to help, whereas I might think about it first. We are almost opposites but there is a hidden recognition that we are very much alike as well.  Its just that the style of presentation is quite different.

The reality is that he often accuses me of not sharing my feelings with him.  Its true, I usually take notice of my feelings and trace them back to the origins before I share them.  He on the other hand often announces an action he is going to take and assumes that he has shared the reason when usually he hasn't.  He thinks I automatically know why he does what he does.  Sometimes I do, simply because I've been there before.

The reality is that he makes quick decisions in a moment of generosity or enthusiasm and I think, "maybe, lets wait and see how it all shakes down".  He backs out a few days later after thinking about it and decides it may not be such a good idea after all.

The reality is that he flings a tough, "I put myself first, and I don't take shit from anyone"attitude out in the world.  He brags on himself and takes compliments with total agreement but nevertheless feels delighted when someone really understands what he's trying to express. He encourages and admires others who are in the art business. He always tries to support local business people and friends and expresses a lot sympathy for others trying to make it on their own.  I've noticed that he will go out of his way to encourage someone he identifies with even when he can't afford it.  He sees it as a tithe to the spirit of those who are trying to do their best. I on the other hand am far more worried about money or the lack of it, and I tend to doubt how others perceive me.

The reality is that he is a romantic and I used to be a romantic. Hmm, do you really believe that? True, it's more complicated than that.  He strives to maintain the romantic outlook and I strive to keep it in check.

I'm also thinking of how his Aquarius Sun, Virgo Moon and Sagittarius rising relates to my Gemini Sun, Cancer rising and Cancer Moon conjunct Jupiter.  There is a lot more to it than just these characters of course.  We are certainly not two peas in a pod but we aren't the opposites we seem to be either.  Its a bit more like the two sides of a Pendleton blanket. The pattern is reversable on each side.
Posted by Marti Fenton White Deer Song at 4:06 PM