Yesterday was our FIRST anniversary, but what a strange day.  From the beginning, chemtrails filled the sky, and there was a dirty gray heaviness that we couldn’t shake.  Chemtrails used to make me sick immediately but in recent years, they usually have little noticeable effect.  Nevertheless, there was something unreachable about the day.  It was almost as if I was only half-present and couldn’t get all the way through to one dimension or the other.

We drove over to Ojo Caliente and around the loop to Espanola, up the canyon and back home. PQ suggested we do the hot springs but I literally could not stomach the idea of being in hot water. Our big splurge was lunch at our favorite Mexican restaurant in Espanola and picking up a few small items at the super WalMart. Everything seemed blah.  I realized the restaurant wasn’t as good as I remembered, and the super WalMart seemed uninteresting (there wasn’t anything I couldn’t leave there even if it was free), and full of obese people who looked as disconnected as I was.  We did see PQ’s sister Bernice and her granddaughter at WalMart and that was our only social connection of the day. 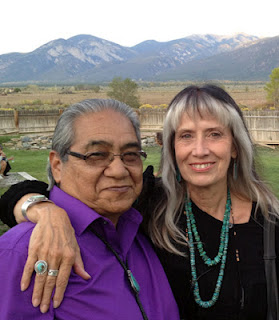 The evening before was energetically the opposite; clear and sharp.  This year we attended the Big Photo shoot and Artists mixer that photographer Lenny Foster organizes at the KTAOS Solar Center each year. This event is a party and group photo shoot for all the artists of Taos. Although we didn’t stay long, we saw many people we know and enjoyed both the Damm Band (that's their name) and the splendid view of Taos Mountain.

This morning is almost back to normal, but not quite. Something changed yesterday, but I can’t put a finger on it.  Neither of us was upset about the strangeness of our anniversary day, we have many wonderful days together, but something definitely moved us sideways from one energy field to something different.  I considered denial since I like the way our life is now, but it wasn’t an option.  We definitely are at the trail head of a different walk.

I know there is a shift in life style in the works; I just don’t know what it is. About ten days ago PQ said, “I’ve been thinking about it for a while and I want to get my hair cut. I’m ready for something new,” so we went to Nicole, a lovely Dine’ hair stylist and barber. She knew something of the native tradition and after the cut carefully swept up the hair, placed it in paper bag and we took it to the Rio Grande above  the John Dunn Bridge and sent it down the river with prayers.

We can’t legally rent either of our houses, mine is a Habitat for Humanity house and his is a HUD house on the rez, so that’s not an option for generating enough income to spend the winter in Arizona, but PQ really needs to be at the lower altitude. Maybe we should buy lottery tickets. Nevertheless, I sense that the options are wide open and anything I can imagine isn’t big enough. Something different is trying to break through the muck and I’m working on a little more faith and courage.  Eventually the Earth will turn over enough times and I’ll look back at now and wonder why I couldn’t see through chemtrails and silly habits. I hope!
Posted by Marti Fenton White Deer Song at 12:42 AM 1 comment:

Sitting outside on the patio there is palpable Taos ambiance blowing softly west from the canyon caressing subtle flickering sounds from the Cottonwood and Aspen in front of me, everything else is still, extraordinarily, mystically still.  PQ is watching one of his deadly TV dramas and I didn’t want to succumb to a TV trance so here I am outdoors with the laptop. Nature rules beyond the front door and I have to concentrate to see what I’m writing because of a big cloud behind me that is reflected on the computer screen with more authority than the Word page I’m working on.

Today, after late breakfast in the old north side Diner, we stopped at the post office. I overheard, “I’d like to get outa here but I don’t have a stash.” Me too!  But I think we are here at least until next month, It's a complicated blessing, Great Spirit willing.

Nevertheless, magic is still alive right here in Taos. Last week’s kitten problem came to a good conclusion, Taos style. After posting his description on KTAO’s “Lost and Hound,” a woman called about a cat. It was confusing at first because the name of one of my friends displayed on the phone but the voice was not hers. To make it worse, the phone was crackling and cutting out.  She called again and I made out among more crackling and cutting out that she would recharge her phone and try again later.  This was great news but still not a sure thing. It was getting cold and windy and I had already decided to let the little guy spend the night in our garage. With that in mind, I rummaged through my garage stuff and found the litter box and a cat bed that hadn’t been used since Joe and Missy passed to the other side almost five years ago. Then it occurred to me that this woman is the current contact of my phoneless friend who has messages left on a friend's phone. This had to be the number of one of her friends who offered the use of this phone number for messages, thus I had my friend’s name connected with this number on my iPhone contact list. Wow, Taos is still a small town.

Just before this call, I’d invited kitty inside.  It took him awhile to believe that I actually meant it, since before we had stopped him on the threshold. We don’t have a screen door and nature can and does walk right in. He really is a respectful kitty and after a few no’s hadn’t tried to get in again.  He purred on my lap awhile before I set him down on the sofa.  There he curled up contentedly next to PQ and I saw anxious wariness in PQ’s body language over the possibility that this cat and I might make our connection permanent.

About an hour later, the woman called again and asked for a description of the cat.  Sure enough, everything fit.  Then she asked for the location and was surprised to discover that we only lived a block away.  Apparently, he wandered to her door over a week ago and she took care of him until he disappeared.  Where he came from before that is a mystery, as is his reason for coming to our house, since she seemed kind and was thrilled to have his company. She said she would sponsor him until his original owner turned up, but really hoped she could keep him permanently. I know he has good karma in addition to his mojo considering the timing for this pickup. If it had taken a day longer, we would probably have taken him to Stray Hearts, our local animal shelter. I was already suffering grim guilt-ridden images of this very social soul alone and abandoned in an impersonal cage.

Autumn in Taos displays even sharper contrasts than that usual gorgeous cerulean sky full of billowing clouds of magnificent height and stunning clarity.  But on the ground the contrast is even greater.  The volcanic bulges on the other side of the gorge look calm because we are used to them but there is still unrest and lots of heat beneath the surface.  So much change in autumn! It also seems to be the season of feral people with backpacks and wild hair looking for a place to crash, just like the loose dogs and cats.
Taos  may be harsher than untamed nature, more like a bobcat caught in a steel trap.  There is some civilization on the surface but it looks tamer than it is.  Instead of history, there are layers of time like painted wood exposed to the elements.  As the layers peal and crack, the essence comes to surface.  It can be cruel here, just as nature can be cruel, but nature is cruelest when thwarted like a chained dog that becomes a snapping fangs, foaming mouth monster.  Here the injustices and imbalances of the human world lie naked and vulnerable beneath the almighty Sun, heart of our universe. We yield sooner to nature’s authority than wealthier more civilized places.

The systems of the surface world never have worked smoothly in this uncooked land.   Electricity goes out often, the internet suffers frequent glitches, old plumbing and wiring is a breath away from death and with every storm, DirectTV breaks up into tiny squares and goes blank.  An exception occurred this spring when someone shot the receiver.

After being out of town for a while, reentry is always a bumpy road. I get impatient with the poorly stocked WalMart that has replaced our town plaza as a community meeting place since the old plaza became a tourist trap, and the  home spun traffic rules, the above mentioned technical challenges, and of course the inconveniences of poverty.  However, there is something important flying in the ether hoping to find a landing spot on my brain. I suspect it has to do with the importance of this place despite its untameable annoying qualities.  The padding between dimensions is very thin here and it hurts when you’re lying on nails. That is important. The deadening of senses and sensibilities in that other world needs our special quirky medicine. But I know there is more trying to get my attention and I will have to wait in patient anticipation for the revelation.