Watering the garden a few days ago my mind drifted to a mysterious ambivalence I always experience when remembering my place of emergence.  Enhancing this was a sudden insight that “watering the garden” is a perfect metaphor for the mental state that resulted in an important insight. Standing barefoot on the earth watering plants in late afternoon brought back memories of the most traumatic and definitive time of my life. To borrow a quote from Dickens, “it was the best, and the worst of times.”

My question has long been what made this time so dark, lonely, and horrific and simultaneously a rebirth into an entirely new and awesome reality? Then it was as if I was suddenly in the body of a big cat frustrated, confused and angry, pacing back and forth behind bars, back and forth between apathy and rage. The enigma faded out as this image came in.  Finally, I’ve discovered the best fitting analogy for my role in the family dynamics that held me captive far to long.

Tiger in a Cage 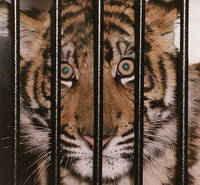 To my parents I resembled a tiger caged in the back yard, hidden out of sight but with a haunting presence. They were somewhat fascinated with me but more embarrassed.  There was a twinge of wonder; some fear mixed with disgust and beneath it all a deeply repressed pride.  What would you do if your only child seemed like an alien species? Should this child be pitied, tamed, ignored or reformed? They tried it all. My mother once confessed only a few years before she passed that she always hoped I would eventually get over it, “it” being the way I am.
I tried to avoid scaring anyone but I never got it right no matter how clever I thought I was as an amateur people whisperer.  Now I recognize that I was not the real source of their ambivalence. It was their own disowned repressed life force shaking the cage bars in hidden terror and rage.

Follow that barely visible path overgrown with weeds. Perhaps someone with authority warned you never to put foot on it. It may lead to a haunted house full of skeletons. If it is your karma to learn about unspeakable family history, you must do this. There will always be an unsettled vacant space in the family soul until someone takes this path. Nevertheless, I must warn you that it isn’t safe to do so.

Watch your dreams.  Mine were of floodwater raging down an irrigation ditch, crumbling the soft clay banks faster than I could run to solid ground. In many dreams, someone or something dangerous was chasing me. The only safety was on the far bank of a river or ditch but too wide to jump.  However, I had to jump and I always succeeded even while clinging and clawing up the far bank frantically with bleeding fingernails and scraped knees. I would wake up with heart pounding and stomach muscles still tense from the extreme effort.

I had religious dreams also.  I was terrified of the second coming that Christians hope will be just around the corner.  I remember deciding on baptism at the age of six.  I knew it was very important to my parents and protecting my parents from their own doubts was my most important job. Even at that early age, I had mixed feelings. There was guilt because I knew I wasn’t being genuine but thought I had to follow this path that my family believed would save my soul, and more importantly their fragile world. For years, there was a repetitive dream of Jesus appearing on a menacing storm cloud to sweep us up to heaven.  I dreaded this second coming more than eternal fire.

We were told in Sunday School that it would happen in the blink of an eye. Jesus was only taking baptized Christians, and that included me.  I was terrified with this sentence and resisted it with every fiber of my being. In one dream/nightmare, the power of Jesus ripped me inside out and sucked me into tumultuous black clouds surrounded by a back-light of fire while I desperately clung to earth. As you may have noticed, Heaven became my hell. As I grew older, it was even worse. The beautiful, courageous, creative, movers and shakers of the world were all going to hell and the naïve, judgmental and gullible sheep were going to heaven.  Heaven seemed too barren and lonely with only big daddy and his boringly perfect son and followers for company.

Our family motto was “keep a low profile, avoid criticism and never seek attention.” I hated the role I was dealt but fell into it as a member of a long karmic line. Honestly, though there was more to it than that. I’ve never been able to leave a problem unsolved. That is the real reason I never killed myself or went insane to escape a seemingly impossible challenge.

That leads to the next insight. While writing this peace it occurred to me that this inability to leave a problem unsolved was the most important aspect of my role in our family.  I pursue intentions like a tiger stalks prey. What was that prey that I was supposed to catch? It was being itself, and I was supposed to catch it for all of us, not just myself. Of course, it isn’t easy to catch anything inside a cage and so my purpose was to find a life beyond the cage. In this process, I’ve learned that even when the tiger is out of the cage it may take a long time before the cage is out of the tiger.

This blog has been a powerful tool in coming out of the cage. As I look back over a fluctuating lifetime, I am amazed at how weakness and strength, positive and negative forces, generate the energy of creation. So many seeming contradictions have morphed into a new level of knowledge. I remember a quote from C. G. Jung to the effect that the dilemma between two opposing forces finds resolution not in the triumph of one over the other but in an invisible third force that accomplishes the resolution at a higher level of consciousness. ( I’ve been trying to find the exact quote without success!)

I see that creative changes in consciousness move out in all directions from a center.  That center may be you and I or any cosmos. It is past, present and future.  We are all operating on many dimensions. When a change occurs for one being on one dimension it rolls out into the multiverse like waves in the sea.  There are many waves, created by many actions, and many of them are invisible changes in the vibration of consciousness. As I work toward my own becoming it also alters the past by changing the effects of that past from destruction to creation.