Two ravens are playing with the wind currents this morning. We haven’t had wind this early for some time. Maybe it will actually rain here today, but I doubt it.  Every afternoon huge ominous thunderclouds assemble over us and the wind picks up, strips a few hanging branches from the neighbors weeping willow and flings them into our yard, then moves out to unload somewhere across the gorge. Yesterday and the day before several huge raindrops fell out of the sky, but only enough moisture to dapple the flagstone walk. 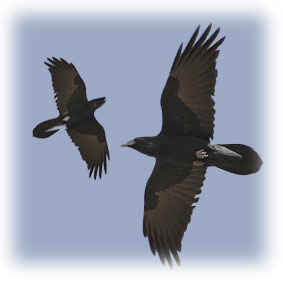 We were in Arizona for over a month and each day I checked the weather in Taos to see if my flowers had any chance of survival.  We have been back for three weeks now and the promised rains never came. There are plenty of magnificent clouds but they are all looks and no performance. Nevertheless, I appreciate their magnificent towering display against the clearest blue sky you will ever find.  Taos has the most amazing sky I’ve ever seen.  I can’t figure out what makes it so unique.  It’s as if there is nothing between you and the sky whereas other skies can be quite beautiful and even dramatic but there is a definite separation between observer and observed that doesn’t exist here.

Taos is always wild and living here is a bit like having a pet cougar.   On one side of my house I am picking up the sound of the town trash collector driving into our cull de sac as he does every Thursday morning, (well almost every Thursday, even trash collectors have their feral days in this town) and on the other side is pure Taos wild.

The wildness that doesn’t yield to human agendas is what I love about this place. It’s also the reason I have to get away now and then.  It can drive you crazy because the wildness seeps into what should be completely human concerns.  I’m talking about more than land and sky, wildness even gets into the plumbing the wiring, and certainly into anything mechanical or electronic.  Your water heater can turn on you just like the pet cougar.

Our water heater just turned on us to the tune of $900.  We were already counting pennies trying to figure out how to augment our quickly dwindling resources to include time in Arizona all the way to PQ’s looming lung surgery, and recovery time after surgery. For the first time since I’ve lived here I decided that I would sell or rent this house if I could get permission from Habitat for Humanity, and then see if I could get a job to supplement our SS. But I made the dangerous mistake of thinking that we had control over our future.  I really should know better by now. Every time I try to be responsible and practical, I end up on my butt.

People are attracted to places with this kind of fresh wildness but then try to change it to coordinate with the living room drapes.  I guarantee that won’t work here. Spirits, if that’s what we are talking about, can be tricky and unforgiving just as often as helpful.  If you have a karmic appointment with the Taos demons you will never get out of this place. I use the word demons in the ancient sense of being neither good nor bad, just hailing from a place beyond human influence.  Sometimes I long for an environment that doesn’t confront me constantly with unresolved karma. Maybe it would be nice to live in Denver again for a while and work at the Tattered Cover. We would both love to have a little place in Cottonwood Arizona where PQ could enjoy the higher oxygen level and be free of family dramas, and not regularly have fist in the stomach surprises.  However, I know from experience that no one who is engaged with the Taos demons ever gets completely free of this place. It will go with you if you try to escape. Recently, we were in Cottonwood having dinner with several of our friends and then it dawned on me that all but one of us had spent a number of years in Taos. No, we didn’t pick out Arizona friends because we knew they were ex-patriots, it just happened.

PQ and I have to find a way to bring in money. It was fun while it lasted and gave us time to catch our breath, but my inheritance is almost gone. It’s a delicate issue in Taos because there isn’t very much money to be had here. I’m totally burnt out on the idea of standing on my feet all day selling Indian jewelry and pottery to tourists, even though I’m pretty sure I could get my old job back.  But 16 years of that did some permanent damage to my soul, not to mention the soles of my feet.  I love to write, to paint and to work with people but it’s not easy to turn what I love into income, especially since I wasn’t raised around the kind of people I like to hang with and don’t know the ropes.  PQ is charismatic and gregarious so his mojo helps us out here and there.  Right now, he is watching a shoot-um-up on TV, but being a couch potato isn’t helping his self-esteem or making good use of his considerable talents. This seems to be a waiting time. Waiting for what?

These uneventful times on the edge of the unknown are perfect fodder for that tricky Mountain.  I sense big change coming. It’s  kind of scary to have no idea what the next step on this tricky trail will take us, not to mention where we will find it, but that now- you- see-it, now-you-don’t trail is how I found Taos in the first place.

Have you noticed how Ravens love wind?  All the other birds find a hiding place to wait it out but the Ravens are doing the avian equivalent of skateboarding on the wind. I knew they were trying to tell me something.