SOUL FOOD UP THE CANYON

It has now been two weeks plus since the Grof Holotropic Module on Jung’s Red Book. This is the first workshop I’ve indulged in since the writing workshop (I think that’s what it was, memory is faded) I attended about 15 years ago. Interestingly, the Taos Ski Valley was the location for both of these events.  This one hosted by the Columbine Conference Center, but next door to Austinghouse the location of that earlier workshop. However, we took our meals at the Austinghouse dining room, not a particularly interesting coincidence in itself, but personally meaningful. The need to be there was about an instinct to loop back and pick up some lost pieces of self that I’m going to be needing; well, maybe not lost but placed in storage long ago and almost forgotten.

To compare life to a house with many rooms, I am on the threshold of an unused room on a different floor. Of course, I want to furnish it with appropriate furniture. Stepping through an unfamiliar doorway whether in time or space is a mixed experience as there is doubt about leaving the old, uncertainty about the unknown and apprehension mixed with excitement.

It has taken these two weeks to get some perspective on the workshop experience. Getting up in semi darkness, hitting the road as the sharp air and early light enhanced the spectacularly golding foliage on the drive through Taos, past Arroyo Seco and up the canyon, to arrive each morning in an altered state.  In this semi-conscious condition came the encounter each morning at 9:00 am with words, ideas, and fellow seekers from diverse realities.

My Gemini self slurped up Monika Wikman’s insightful and inspiring introduction to Jung’s Red Book, with the enthusiasm of a starved cat on Tuna. The breathwork, which was the foundational work of the module was good and I reoriented many core issues, but it wasn’t the full diet for a hungry soul.  In the process, I was reminded that I need regular contact with fellow seekers and practitioners and although I do not yet know how to bring that about, I’m increasingly aware of the limitations of living in a small third world country like Taos.

This was the first time in three years that PQ and I have been apart for more than a few hours. He did fine on his own, even though we were also coping with the recent death of our truck and he had to deal with the insurance company and various other technicalities that we usually handle together yet he faithfully drove me up the canyon every morning and back home every evening in our one vehicle.  Each day was unique in the wild animals encountered on the way and the constantly changing autumn foliage. This drive was itself a powerful ritual that brought a new piece into our relationship, and synchronistically enhanced the workshop.

Being in my old hero Carl Jung’s company again was inspiration for renewing my quest for a navigable path along the border between modern and indigenous psychic territories.  Jung’s use of Alchemical symbols and dreams rekindled my desire to translate the thought forms of native medicine and vice versa.  Jung used persecuted philosophies and techniques disrespected by both the church and the current beliefs of scientific materialism to heal modern people whose souls were unfulfilled within the psychic vacuum of our modern world. Many people are suffering from the loss of connection with their roots, as well as with the planet that hosts them and all the natural processes they share with their fellow beings on Mother Earth. However, Indigenous people often have malnourished souls due to the suppression and oppression of their ancestral connections, but I don’t think Jung’s alchemy would work for them directly without cultural translation, and I know of no one who has attempted to do this.  Jung was an inspired and powerful medicine man but his language and images are of arcane European derivation.  I went to the workshop in hope of reigniting the pilot light under the vision that originally brought me to New Mexico.  Experience tells me that after descending into the basement world of the unconscious, the experience of this workshop will continue to rearrange the furniture in my personal psychic basement, but I’m really waiting for a light that will reveal the stairway leading to the top floor. 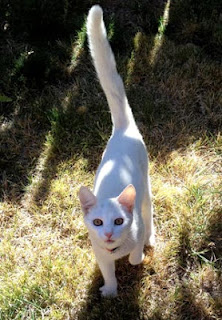 Now I’m back in my Taos world, drinking coffee with PQ on the patio each morning, eking the last bit of fall beauty from the too fast approach of winter.  Each morning the plants around us lose a bit more of their color as they withdraw for winter.  The vultures have gone south and hawks have taken their place.  Coyotes yip and howl a bit closer each night.  Just before the workshop, our new animal friend suddenly reappeared. The white kitten came through the latia fence for a visit. He now wears a collar with his name and phone number on it. He is obviously well cared for but still visits each morning. Yesterday his ginger tabby friend came with him, and we watched them stalking imaginary prey and chasing each other up and down the cottonwood tree.  Isn’t play the way cats learn to catch their prey? Perhaps the white cat is a new teacher for the White Deer. Both animals are unable to hide in the normal way of their species due to their neutral but stand out lack of color yet one is predator the other prey.

Yesterday PQ and I took a drive, which I’ve discovered is always a good time to talk about the things that everyday life obscures.  For the first time I shared some of these thoughts with him and it helped me to be clearer about what the workshop brought to my attention.  Now, alchemical transformation, synchronicity, playful practice of hunting techniques and my personal relationship with the essence of the indigenous world are all tumbling around in my psychic innards and it’s a process that my conscious ego self has little control over.  I feel that I’ve taken on more than my little self can digest and now I have to rely on my guiding spirits. Everything is to be continued.