This morning was the start of the 6th day without natural gas. I've been cooking on an electric fryer and the Microwave. The coffee maker is electric so that's been our source of hot water. We are lucky that the electricity held up. For a few days that was also dicey. The weather this week has been the coldest for many years and that made the loss of heat desperate. The unexpected cold was, of course, the cause of the outage in the first place. But the weakness of our big systems has been exposed this past week. 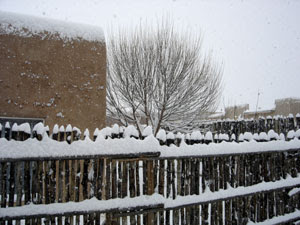 Along with the weakness of the natural gas system, the local and state government and the suppliers of gas and electricity have been exposed for being asleep and then for waking in a confused fog. The information given to the public was inconsistent. First they told everyone to wait for the teams of professionals made up of their technicians and recruited volunteers from New Mexico and even as far away as New Orleans and Colorado. Then the word came out that considering the enormity of the situation it was OK to light your own gas if you knew how. But mass confusion soon set in as this word went back and forth. Coyote the Trickster was leaving his footprints.

Tired of waiting for one of the gas lighting teams to show up, we piled in the truck this morning and went looking for them. Radio announcer Paddy Mac has been on all day each day since this began. He has opened up KTAO's airways to the public and it became apparent that the public knew a lot more than the officials about how to get things done. At the Shell station down the road we saw some National Guard troops gassing up their Humvee. We asked them if our block was on their to-do list but they didn't know and said to go to their info center at the Storyteller Movie theater parking lot. We couldn't quite understand what the National Guard was doing to help and it seemed that they didn't know either. They were just following the orders of our new governor. Their colleagues at the theater took our name and address and said they'd get back to us when they knew something.

The place where Standing Deer picks up his oxygen was closed until today due to the outage. After picking up his oxygen this morning he saw one of the relight trucks and flagged it down. A young man followed him to our house turned on the meter and lit the gas. Wow! Life may go back to normal after six days without natural gas.

However, I don't really think this story is over. The Taos trickster has been stirred out of his den and I have no doubt that there will be more twists, turns and switchbacks on the way out of this debacle. Taos itself is laid out more like a field of fractals than a modern town. It grew organically; tiny lanes going off in this and that direction often hidden by volunteer foliage. Family complexes go back many generations and are known by family rather than street name. Neither the Town of Taos, or the gas company seems to have accurate maps to go by and the volunteer gas lighters seem to be wandering in confusion. That's why we decided to find them rather than wait for them to find us. We would probably be stiff by the time they found us.

Taos, and for that matter, most of Northern New Mexico is still a third world country almost secretly embedded in the United States. The fact that we are one of the poorest counties in the US is not above examination either. But there is something tricky about the under dog status that is very powerful in its ability to expose the weak side of the top dog. Since the outage people have missed work, pipes in public buildings broke causing hundreds of thousands of dollars damage, children were out of school, restaurants were closed as were many other businesses. Life in Taos is a hand-to-mouth situation and the loss of work will mean rent, mortgages and many bills won't be paid. At this point it appears that FEMA may also get involved, but that isn't validated. When this whole town shuts down the ripples will go on for a long time.
Posted by Marti Fenton White Deer Song at 4:09 PM