We are safely back in Taos. Our art is still hanging on 15.Quince’s walls and we will leave it in place for at least a  month, so if any of you are in Cottonwood, Arizona have a look.  Vladimir Costa, the owner/chef treated us fabulously.  He also proved to us that he is an artist spanning all the senses. Not only is his food outstanding but his sense of design is also acute. We will return before long to do some ceremonial work   for him and his restaurant. There is no doubt in my mind that if we could see the invisible energy connections between ourselves and other beings we would see an interweaving pattern of fractal designs that connect us with our relatives over time and space and yet it still surprises me how these connections emerge when we are least expecting them. Carl Jung called it synchronicity.

I thought we had everything ready for the show but soon discovered that there was a lot to do and some tasks that required immediate attention. It was also a Full Moon and I missed a lot of sleep, from which I’m still recovering. We had to charge a number of things to the credit card which I’d been trying to avoid. However, I have a sense that all will be well down the road if I keep the faith.

The trip back to Taos was uneventful except for the most fabulous cloud shows. Cottonwood and Sedona were uncharacteristically humid after several days of rain, thus the sky was free of chemtrails and the air was wonderful. Nevertheless, I dread a powerful full moon when on the road because of its effect on animals.  There are always many roadkills along the highway after a full moon.  This time was no exception. We saw dogs, cats, coyotes, skunks, raccoons and even birds.

It also rained in Taos and the lawn looked like a hayfield when we got back.  The black kitty found us right after we unpacked.  She was wet from rain but happy to see us. We let her in until she dried off. Later it rained again and I decided to let her into the house for the night. I opened the front door and said “kitty?”  but didn’t see her anywhere.  Then I heard a faint but nearby “meow,” but still couldn’t see her anywhere although the sound was close.  I called again, and then there was a thump and she was standing in front of me.  She had jumped from the top of the porch.  I guess she discovered being on the roof was a good way to avoid hostile feline intruders, a lesson well learned after being thrashed shortly before we left for Arizona.

The next morning, I discovered that I had no internet connection. After several hours on the phone with a tech support guy at Kit Carson Internet  trying everything, he determined that my router was worn out. He lent me an extra until I could buy one. But, during our attempts to get the old one working we changed the user ID and IP number so now PQ’s connection to NetFlix is gone until I figure out how to reset internet connection on the TV. Since my memory doesn't stretch back to the last time I did these settings, I may have to find the instructions. meanwhile, I retried the old router and this time it worked. There are definitely some weird vibes out there.  On this same day Albuquerque experienced a super storm that toppled trees, flooded neighborhoods and took down power lines. The TV weatherman said it was virtually like a hurricane without involving a sea.

Our return journey to Taos was beautiful and thankfully uneventful except for the unusually beautiful clouds all the way from Cottonwood to Tesuque after which it became too dark to see them. I kept shooting photos through the bug spattered window shield of the car. I hope there was some one around with a great camera and a good place to shoot. I wish I was one of them. I suppose these beautiful skies were a sign of the extreme weather to come. 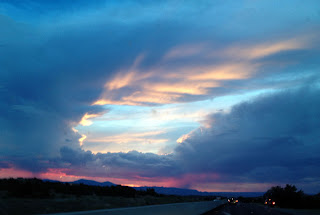 The weather report is on TV right now and it looks like Albuquerque is not the only place experiencing super weather. Albuquerque caught up on their yearly rainfall in just one afternoon.  Perhaps this is all an aspect of global warming. Mother Earth is getting seriously rebellious about the way we are treating her.

This is the stunning display as we left Santa Fe. I wish I could show the true size of these clouds, they were awesome, and it just kept getting better.

It is raining again as I write this.
Posted by Marti Fenton White Deer Song at 7:45 PM