“All journeys have a secret destination of which the traveler is unaware.” ---Martin Buber 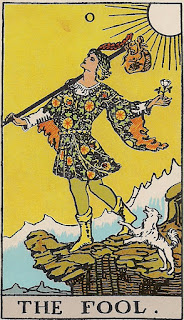 This quote reminds me of the first card in the Major Arcana of the Tarot, “The Fool,” depicting a young man striding toward a steep cliff with his eyes focused upward, a bag of karma strapped to his stick and his excited dog running at his heels.  Behind him shines the Sun as master of life. This card at the very beginning sets the tone for the rest of the journey through life.  Its number is 0. He holds a white rose of beauty and innocence in his left hand. This is the beginning of a sacred journey.In the distance are high jagged peaks. These are a potential upgrade of his status if he makes it far enough to scale higher peaks. First, he will experience his first death almost at the beginning of this trek.

When he plunges, he will feel the victim of a cruel world that does not honor his high intentions and innocence.  The dog, his animal self will follow him out of loyalty and will howl in pain but take the fall  simply as natural phenomena.  It is white and pure. This is the animal instinct that can save him from wounded ideals and misapplied confidence in his sense of direction. His undershirt, the rose, the dog and looming high   behind the traveler is the White Sun.  They are all parts of one experience. This journey is an expression of the Sun, sustainer of life. The White Sun also has esoteric meanings I won’t explore just now.  The shock of every birth and death is enough, and there are many ahead for a sincere explorer. However, it is the secret that drives us over one cliff, and up another peak, again and again.  It isn’t that we never learn the secret, but each layer of the cosmic onion holds another ineffable mystery. And creation continues to unfold.

I am learning that inner piece is the true center of power in this journey. When I meditate, I see myself in the center of the world and everything else is spinning around me, but I don’t spin as long as I hold the center. This is a dangerous thing to write. As soon as I claim something, a test is delivered pronto.  However, losing the center is another exploration. Last night I found myself wondering how to cope with a future that is without any identifiable net anticipated at the base of the next approaching cliff. I have lived without any financial or health security most of my life, and common wisdom tells me that at my age this is a perilous situation.

When I was 12 years old, I had a small pinto horse named Shorty. He preferred to stay home but I liked to ride him around the neighborhood in the afternoon after school.  One day he decided he’d had enough of me and the snaffle bit on his bridle didn’t give me enough leverage to stop him. As he galloped toward the looming corral gate, I knew that he would come to a sudden stop and since I was riding bareback, I would end up draped over the gate.  There was nothing I could do about it and that realization caused my body to go from stiff and terrified to resigned and relaxed. When the inevitable happened, I was indeed draped over the gate but completely unharmed.  I won’t say this event cured me forever of worrying about approaching danger, but it was a powerful lesson and I never forget it. Actually, I repeat this lesson again and again in many different forms.  It seems to be a major life theme.

Worry about a future I have no recognized preparation to cope with is also an inherited theme.  Both of my parents came from poverty and day-to-day uncertainty as to where the next home or next meal would come from.  The world beneath their feet was in constant motion. My mother finished only one grade in the same school in which it began.  Dad had slightly more security but not much. His dad dropped dead when he was still in high school and he had to quit and become a family provider.  Those were the depression era circumstances.

The Major Arcana of the Tarot reveal archetypal steps on a life path. They are open to interpretation on many levels. I know only a few of these possible interpretations but find that they continue to teach even when I’m not trying to learn.  Each time I go through this routine it is different. Age is a blessing on this journey because experience aids recognition.   Besides, as one gets older, time moves at an incredible speed. It seems unfair. The less time you have in a body, the faster your remaining time moves. However, I notice that it also comes with perspective as if standing on a mountain looking down at all the places and situations you have experienced and a chance to recognize the “story “ as if life was a novel.  Well, maybe it is.

Life as a work of art! I like that idea. A good novelist creates a reality that has all the features of life and uncovers the core of human existence by focusing a laser beam on the essence of the protagonists, thus making a hole into another dimension in a way that only the most conscious of us achieve with our own life.

After all, perhaps we are creating our life as a novel moment by moment, including the interaction with the many other characters and their stories simultaneously unfolding. Watch how they dance in and out of your story. What an amazing cosmic drama we live in. Now, imagine opening the book, you are writing and begin reading from the beginning as if it was someone else’s story. Which chapter are you on now? How do you want it to end? Are you planning a sequel and is your story incomplete? Of course, that’s why you are still here in story writing school. Mistakes, wrong turns, deleted pages, yes, and all-important practice until you are ready for the great publisher of the cosmos.

Posted by Marti Fenton White Deer Song at 3:48 AM