Another challenging life event has presented itself. The little house in Cottonwood, Arizona that we lived in during the winter of 2009/10 is for sale. It is actually affordable if we should decide to buy it. However, then we would own three houses. I put three houses on my want list two years ago but felt a bit like a greedy profligate when I did so. I envisioned being able to move around from one home to another, and to rent out the ones we didn’t happen to be using. Since I also believed there was an energy flow between Sedona and Taos that I wanted to connect it seemed meaningful. But my old self thought that was humbug. Perhaps the primary lesson is about which values I’m going to represent publicly. 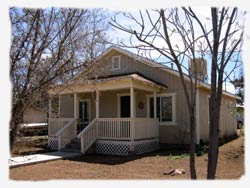 I never let go of the little house in my heart. It represented another layer of being. I felt excruciating sadness when I looked at the pictures we took while decorating it and remembered our morning coffee on the porch, watching the lizards and birds, the neighbors roosters crowing at 2:00 AM, the view of the mountains to the west and how close we became while living there. The loss of the furniture inherited from my mother and PQ’s mother still haunts me. We had everything we needed plus the things we found at Saddle Rock Barn and the second hand stores of Cottonwood. All were intensely infused with the joy of our first adventure as a couple. This was the place where our new life began. Although I loved my Taos house, this little house was not his, or mine it was ours. I see that it marked a significant life shift that began with great hope. But we ran into glitches early on such as the truck blowing a rod on one of our trips back to Taos and the failure of our plans to rent out our Taos houses to cover expenses in Cottonwood. Yet we had a wonderful time in that house making it our home base and exploring the area. When we had to leave it was heartbreaking and we knew we wanted to come back. We couldn’t find help to get our furniture out of the house and back to Taos and we both still regret selling and giving away everything. I feel guilt as though I'd committed a crime against the spirit who led us there and our parents who provided our furniture. How can this be healed?

So here is another life challenge. I actually put this whole arrangement on my secret want list some time ago. It has manifest as a possibility exactly as I desired. Not perfectly however, desired and perfectly are not the same thing. The house is under lease until January 2012 and the realtor says it is a short sale, for me a new real estate term that means it is being sold for less than is owed on it. However, it brings up one of my core issues. Do I deserve it and is it real, or a trickster’s tease? Or is it a phantom that belongs to a time that has now passed? Although it is of great interest, I realize that I must not plunge into a new commitment that is beyond our means, and at the same time it may not be possible to pick up where we left off. That sounds like two issues but they are welded together.

When I moved to Taos almost 20 years ago I manifest the whole situation exactly as it turned out. But this doesn’t mean it turned out perfectly. Some things blew up in my face. In retrospect I can see that the reason for this was that I was trying to make two opposing life agendas work together. This has been a lifelong pattern that I wish to be rid of. Taos does not permit that kind of nonsense. Less charged environments, like the one I'd come from, allowed such prolonged impasses and the ensuing stagnation and consequently I didn’t fully perceive the absurdity of trying to stop and go at the same time. Each confirmation or realization of a hope or dream comes loaded with karmic lessons. I’m not being negative when I say that. In fact I believe that one of the faults in the currently flouted teachings on manifestation is that it usually fails to acknowledge that everything has two sides and when we acquire something we seriously desire we also receive a lesson on the hidden motives for placing importance on this desired object or situation. In addition the universe operates on a higher level than individual desires. The good and the bad work in tandem and we don't have the perspective to see the big picture. Often these seemingly small issues are a doorway to a karmic healing.

In my case the karmic issue is, “do I deserve it,” and if I don’t will I be punished for manifesting it? I believe I need to break this down even more. I don’t generally believe that I deserve anything, because I don’t believe in my right to be here in the first place. Am I breaking some cosmic law by existing? I suspect that this is related to my baby sisters death and the events surrounding her death when I was three years old. This period of time marked the beginning of my alienation from the people around me. Her death also triggered the sicklyness my mother experienced for years after my sister’s death. I on the other hand was a perfectly healthy child, brimming with energy, curiosity and life force but I came to feel ashamed and even embarrassed about being who I was and for being alive. I’m sure in retrospect that I actually felt responsible for the death of my sister and the ensuing suffering of my mother. My mother dramatized her sicklyness in an attempt to activate some kind of compassionate response from my father and her friends. Instead they withdrew and left her feeling abandoned.

To enforce this situation my parents seemed to find most of my enthusiasms and passions totally unacceptable and inappropriate. It was comparable to making jokes and playing games at a funeral. I embarrassed them just by my childish existence. On the other hand I acquired some importance by being independent and helpful. My own needs and desires, however, didn’t fit into the arrangement. My central conflict is about what to do with the life force and if one can live correctly in a world with other people.

Is a good life, a creative, passionate and influential life possible when surrounded by the pain and failure of others? I set out to fail in my hopes and desires from the beginning to avoid the unbearable heaviness of guilt. Now I’m trying to sort the real from the neurotic. But I’m no longer a perfectionist. I’ve learned that there are many ways to get to the right place and its better not to become obsessed by just one.

Email ThisBlogThis!Share to TwitterShare to FacebookShare to Pinterest
Labels: Manifestation