OPPOSITION / REFLECTING ON THE FULL MOON

Life/death, black/white, good/evil/, male/female, happy/sad, wet/dry, hot/cold, friend/enemy are some of the primal oppositions that we take for granted as basic components of existence. It would seem that everything we experience has an opposition as its basis of definition. Astrologically, opposition is the second most powerful aspect between two planets and indicates a direct confrontation between two different cosmic processes. 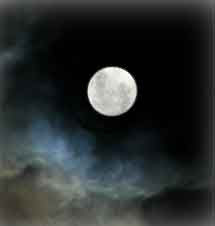 The Sun/Moon opposition is called a full moon and it represents the culmination of a cycle that is so familiar to we Earth dwellers that we can barely imagine life without it. Astrologically the opposition is considered the most basic encounter with another cosmic energy and often plays big in relationships both good and bad. Opposition brings dynamism and it would seem that it lies behind all other experiences.

Opposition is also the beginning of consciousness and spawns reaction and creation. It is the matrix behind love and war.

It is easier to conceive of opposition than conjunction which is two energies combining and attempting to resolve their differences. There is unconscious familiarity in a conjunction but opposition may dwell within the conjunction if the nature of the participants happens to be opposite, but it is a less stimulating environment than opposition. Opposition is the very first step in experiencing existence other than our own and in the process reveals our own. Often the first experience of this duality is to be confronted with hostility or limitations on our own playing field. In other words, opposition is an experience of the other and it is sometimes beautiful and sometimes dangerous. If we examine objectively it is often both.

Today’s full Moon involves the very archetypes of opposition. The God of war confronts the Goddess of love in this Aries Sun, Libra Moon opposition. Creation itself is based on the opposites represented on every level by Mars (Aries) and Venus.

Opposites define each other. It seems that we would not be aware of anything if there were not an opposite to give it distinction and definition. And then after the opposition comes the realization that dualities always come from one and return
to their one source.