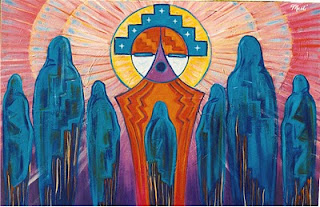 I always have questions and musings about what lies behind everything we experience as inside or outside this entity we each call “me.”

Think about it. Power is a great motivator, perhaps the greatest motivator. People have been seeking power since forever began. To seek wealth is actually to seek the accumulation of power. Wealth allows one many options in the physical world. Also, it places one above the vulnerabilities and dangers that poverty exposes one to. Well, at least that is always the hope behind the acquisition of wealth. Nothing protects an individual or even a group against death or the possibility of loss of power that comes with an invasion by someone with more wealth and power. And then there is a greater power that defeats all other powers that we call death.

The power of the disenfranchised is generally the possibility of taking power away from those who hold it. To remove wealth, social standing, self value, and finally life itself from another is the dark power of death. Every child has at some time in a rage about not being able to master something destroyed it to demonstrate who was boss to him/her self if to no one else. In truth I have always suspected that suicide is motivated by the need to remain in control of ones life and personal power when faced with the indignity of an ultimate loss of power. It’s an “I’ll show you,” approach to the death of personal power.

Power isn’t really about survival beyond the basic need to find food shelter and fellow humans to live among mate with and share tasks and skills with. However, it does seem that as long as death exists humans will always find their pursuit of power ultimately futile. Is that why we invented religion? The religion that is the current orthodoxy, i.e., science says that this is the case.

As I think about the attraction of power it occurs to me that all people have a natural desire to be godlike even though it often comes out in a distorted and ugly form. Spirituality is hardwired into the human species, of this I am convinced, and it will emerge one way or another. If not in a creative and protective way, then it will come out as the power to destroy. By spirituality I mean the desire to be Godlike. It is the ultimate attraction that lies behind most other attractions. With this desire comes the affiliated response to that desire, worship. What a paradox! Worship is a response to a form of power one respects and desires and by its very essence acknowledges what one doesn’t have and yet wants to have. It often comes with mixed feelings of fear, love and envy.

Let’s put aside the whole argument of whether or not God or a higher power exists. I am sensing more intensely as I explore the whole issue that it doesn’t matter what we conceive mentally; we are nevertheless driven even on a cellular instinctive level to acknowledge a higher overarching intelligence and ultimate power that we might as well refer to as God. Certainly a belief in God eventually becomes a trip up because the part could never contain the whole by the very nature of its situation. For that reason what we refer to as God could never be either proven or disproven. That is entirely beyond our realm of operation considering the limits of our equipment.

Those who believe that there is no reality beyond the five senses and the rules of popular physics are essentially the cell trying to understand the body that contains it. All one has to do to blow that naïve assumption apart is to see how a fly’s eyes are structured. Ultimately it is not ours to believe or disbelieve reality, since being one of its products we can’t know what it is.

Authority is another aspect of power and godlikeness and it is often paired with tradition. Humans are by nature herd animals and seem to require a pecking order so that various functions don’t collide and things are kept moving effectively. To some degree this is a survival issue. But circumstances change and it seems that they change more rapidly than the authority of tradition and inevitably there is a collision between the way things have “always” been done, and current needs.

Since we haven’t been at it very long, we tend to assume that we are very advanced as a species. I remember my mom telling to me once, “when I was thirteen I thought about all the things I knew and decided that I knew everything I could think of.” Of course she thought it humorous that her thirteen year old self believed that all the things that she could think of was the same as all that was. But is that so far removed from taking our senses and current knowledge as ultimate guides to that which is real? All we have to do is read an old textbook or see a documentary based on outdated assumptions to recognize that what is called science is still tenuous.